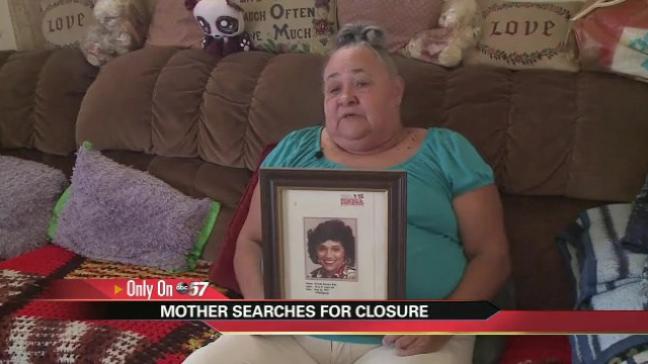 After the capture of Darren Vann, one South Bend mom believes her missing daughter fits the profile of his alleged victims. Sandra Powell was 17-years-old and pregnant when she vanished from her home over 25 years ago.

Powell's mother said her disappearance has been a nightmare for her family.

Sally McCoy said, “We've gotten to where we live with it now pretty good but from the start it was just hell. It was really tough. The kids were all upset and out of whack and I was upset. It was really hard.”

Powell disappeared in March of 1987.

McCoy said, “I went to my second job and when I came home she wasn't here and haven't heard from her since that night.”

McCoy said a South Bend Police detective and Crime Stoppers have reached out to her in the past year to let her know they are still working on finding Powell.

McCoy said just days before Powell disappeared, she testified in court as a witness in a murder trial, and she was threatened for doing so.

McCoy said, “They had pulled up and opened fire and killed her friend. And she hid down in the floor board in the car.”

McCoy said she watched the news on Monday and saw that Darren Vann had led police in northwest Indiana to several women's bodies. She said there's a chance her daughter's disappearance might be connected and hopes police look into it.

McCoy said, “It's possible. Definitely possible. The children and I try to go along day by day just thinking that she's out there someplace. Everybody says give it up and admit she's dead. But I don't do that. I still have hope.”

If you have any information on Sandra Powell or where she may be, call Crime Stoppers or the South Bend Police Department.
Share this article: