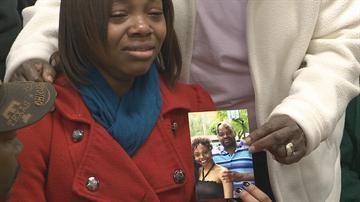 BENTON HARBOR, Mich. – Last week, 44-year-old Timothy “Bulldog” Allen walked away from Lakeland Hospital in St. Joseph and hasn’t been seen or heard from since.  On Tuesday, Benton Harbor Department of Public Safety Director, along with Allen’s family, held a press conference ask for the public’s help in finding Allen.  His 19-year-old daughter Tamika sobbed as family members pleaded for any information the community could give.

“Anybody with any information about his whereabouts, a last seen, please contact the Benton Harbor Police Department,” said one family member, holding a picture of Allen.  “The family wants him back, please help us.”

At around 8:30 p.m. on November 9th, Allen, a father of two, was reportedly acting strange, delusional and irrational outside of a cousin’s home on the 500-block of Pavone Street.  For the past two-months he had been suffering from seizures, so his cousin called 911 for help and he was taken by ambulance to Lakeland Hospital.  There, he refused treatment and walked away from the emergency room.  According to family members, he was last seen walking across the Napier Street Bridge towards Benton Harbor.

The Berrien County Sheriff’s Department Marine Unit searched the banks of the St. Joseph River.  The search for Allen was also aided by the FBI Violent Crimes Task Force.  Abandoned homes and nearby woods were also searched, no trace of him was found.

“At this time we do not suspect foul play but we’re not ruling that out,” Lange explained.

The department has asked anyone who has any information about Allen to contact them to aid in the search.

“We have not found my brother and we’re still looking for him now,” explained Jeffrey Allen, holding back tears.

Allen is better known as “Bulldog” around Benton Harbor.  A former golden gloves boxing champion whose known for a bright smile and friendly nature.

“It’s not like him not to be around his family at least once, twice a day.  We see him and we haven’t seen him at all,” explained Jacqueline Perry, Allen’s cousin.

Police and Allen’s family also asked for the public to stop spreading rumors about Allen’s disappearance on Facebook and around town.  Stories had spread online that Allen had been found dead underneath a bridge, Allen’s daughter broke down crying as Director Lange explained the pain the rumors had caused the family.

“How would a family be expected to feel if all of a sudden somebody contacted them and told them something like that and it’s not true?” Lange asked.  “Have some decency about yourself, have some sensitivity about yourself.”

Allen is 5'7'' and weighs around 155-pounds, he was last seen wearing a red and orange camoflauge jacket and dark pants.  Investigators and Allen’s family begged people to focus on helping to find Allen and call in any information that could be of use to police.