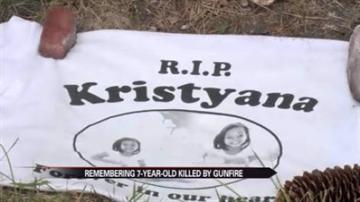 ELKHART, Ind. -- Exactly one year has come and gone since an unknown suspect shot and killed seven-year-old Kristyana Jackson at her Elkhart home. Kristyana's held a vigil for their daughter and say they won't rest until her killer is brought to justice.

Kimi and John Jackson wanted to hold a vigil for their daughter as a way to remember their daughter and meet up again with the neighbors, friends and family who have helped them the past year.

"We just feel that one day it will be solved. and we were just thinking the month of her birthday, I think that was just a lot of hope," said Kimi.

He says everyday is a different struggle.

"You're mad, you're sad, then you want to get even but then again you want justice so I mean every day is different," said John.

Monday is the one year anniversary of the shooting.

Kimi and John spent the day preparing for the neighbors and strangers who will pay tribute at the vigil.

"It was kind of a slow start of a day. And once we got up and got moving and doing the things that we needed to do, being around people definitely helped," said Kimi.

Despite the loss that still nags at them everyday they see their daughter's spunk and love of life in their nineteen month old son.

"Sometimes we wonder if she's like sitting next to him like watching TV with him cause sometimes he'll like turn his head like he's actually talking to somebody sitting next to him and then he'll look back at the TV and he'll just laugh and we kind of look at each other and laugh."

The vigil starts at 7 p.m. Monday at the corner of Kilbourn and Myrtle streets.