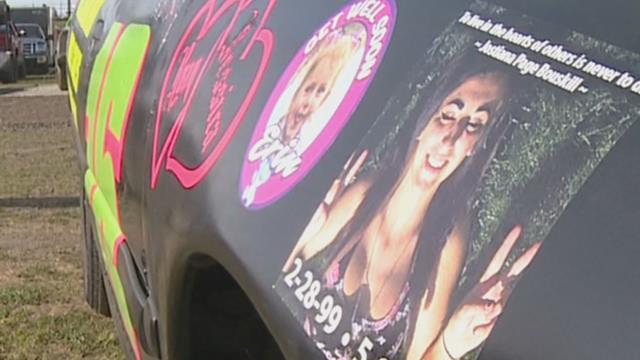 Bouskill’s cousin Ryan Barnes races at the South Bend Motor Speedway. At Saturday’s race he unveiled the top of his race car now features a photo of Bouskill.

Over one hundred of her family and friends came out as Barnes raced in her honor.

“It’s just a privilege, an honor to be able to do that for the family,” said Barnes.

Barnes says Bouskill was one-of-a-kind. She is described by her family as a rebel with a hippy heart.

“She was definitely a one-of-a-kind and that’s the least I could do. I’m going to race all year with her picture up top. It lets the family know she’s not forgotten about, she’s remembered,” said Barnes.

Barnes is selling smaller versions of the car decal to raise money for funeral expenses. They can be purchased here.

To donate to the Go Fund Me for Jostiana’s funeral, click here.