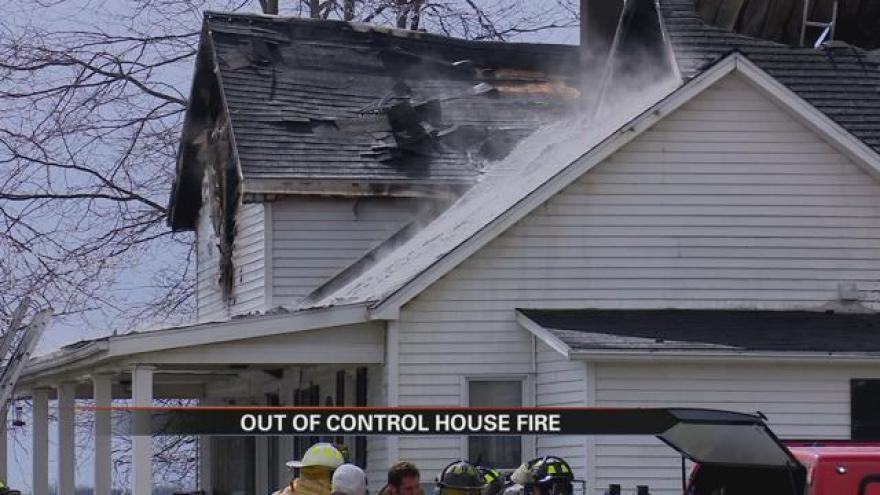 Water continued to seep down the front porch of a bourbon home after thousands of gallons of water had to be poured onto the roof Wednesday morning.

The bourbon fire department responded to a house fire in the 11 thousand block of beech road around 9:00 a.m. The origin of that fire is still under investigation but fire crews say it started in the back of the home.

“Wood stove area which is in an out-building attached to the house,” said Brandon Chapman, Fire Chief of Bourbon Fire Department.

There were three people in the home who were able to escape and no injuries were reported but fire crews were faced with more than they could handle.

“We sent three crews in total, they made some headway but it got out of control beyond their capabilities pretty quick,” said Chapman.

The Fire chief says due to the type of construction and the overlay of the roof, fire crews weren't able to get to it very easily. Within a few hours, ten different fire departments were on scene bringing along with them tanks of water to help put out the flames.

“It got too dangerous for them to be in, in fact, probably within 5 minutes of pulling the last crew out the roof caved in. At that point you just fight it from the outside,” said Chapman.

But in the end, he says it’s nothing compared to the loss that family is now suffering.

The homeowner says his wife passed away just two weeks ago, leaving him and his family not only grieving over their loss of her but over the loss of their home. The Red Cross stepped in Wednesday evening to help the family. More than 20 different vehicles stopped by the home to help the homeowner and his family get as many belongings out of the home as they could.