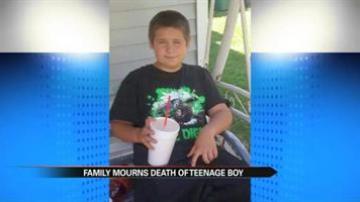 Skyler's family says the generators were running in a ventilated basement because their power was out and his parents were doing everything they could to still provide for their kids.

"He was the best brother I ever had," said Skyler's 11-year-old brother, Tyler Spore.

His family says if you saw Skyler, he was usually dribbling a basket ball or catching a football.

But Saturday, around 3:45 p.m., Skyler's mom was unable to wake him up. She realized he was not breathing.

"I did not really believe that he was gone until I actually got to the house and I saw him," said Skyler's cousin, Ariel Jeffords.

Police say Skyler may have died from carbon monoxide poisoning.

Officials say they are still investigating and an autopsy is being performed in Fort Wayne.

Skyler's aunt, Adrianna Wray just wants him to be remembered.

"He was a good kid, he did not get into any trouble, he was good with the sports, he is going to be missed very much," said Wray.