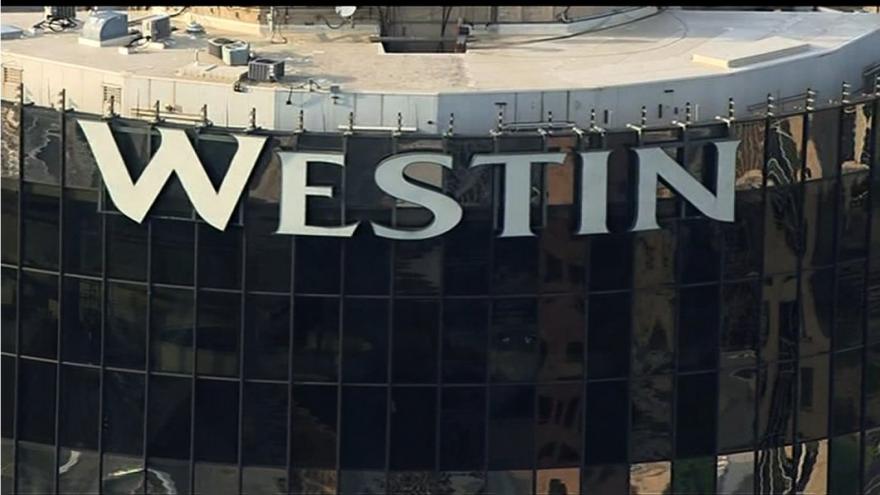 (CNN) -- The family of a 5-year-old boy who died after being crushed in a rotating restaurant atop a downtown Atlanta tower has filed a lawsuit against the restaurant, its owners and staff.

The boy, Charles Holt, was at the Sun Dial restaurant with his family during a visit to Atlanta on April 14. The dining spot tops the 73-story cylindrical Westin Peachtree Plaza Hotel and rotates to give patrons a panoramic view of the city.

Holt died after being trapped between a wooden booth and a moving wall.

The suit alleges the restaurant, as well as the hotel and others, were negligent in failing to address a "longstanding safety hazard" that led to Holt's death.

The suit also alleges there were no protections to stop children from getting trapped at a "pinch point" and that no emergency stop mechanism was in place to quickly stop the rotation should an emergency arise.

"The control box that controlled the rotation of the platform was mounted against the ceiling in a separate room away from the pinch point."

Marriott International, which owns the hotel and is named in the lawsuit, refused to comment.

The lawsuit also names Marriott subsidiary Starwood Hotels and Resorts Worldwide, as well as employees of the restaurant and hotel. Also named are the architects, contractors and interior decorators used during the renovation of the Sun Dial in 2013.

The Holts also dispute initial reports from Atlanta Police that the boy had wandered off from their table while they were having lunch.

The suit says the family was leaving the restaurant together, after paying for their meal, and the child was a few steps in front of his parents when he became trapped. "Charlie's parents were only a few feet behind him and immediately went to help him," the suit says.

The suit also describes in detail the harrowing moments after Holt became trapped -- and the frantic efforts to free him that were made by his father, Michael, and his mother, Rebecca.

"Rebecca grabbed his arm but could not move him. Michael could not free him," the suit says. "The Holts screamed for help, for someone to stop the movement."

"After a restaurant employee finally went down the hall to a separate room and stopped the rotation, it still took several grown men what seemed like an eternity to get Charlie out," the suit adds.

Charlie was taken to nearby Grady Memorial Hospital and died a few hours later.

A separate statement released by the family's attorney accuses Marriott of endangering the safety of their guests.

"If Marriott had acted responsibly in the face of this known safety hazard, this tragedy would have been prevented. It is never acceptable for a business to needlessly endanger patrons," the statement says.

The family is seeking unspecified damages for negligence as well as a jury trial.

"The family has filed this lawsuit to set the record straight about what happened and to make sure, to the best of their abilities, that no other family ever has to suffer the same fate," the statement adds.