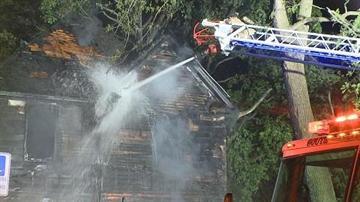 SOUTH BEND, Ind. – A family of eight rushed out of their South Bend home when the next door house, which has been vacant for two years, went up in flames.

Fire officials said the house, located near the intersection of Donald and Marine Streets, was fully engulfed when crews got to the scene.

The family who lives next door said they rushed out safely when the Grandmother spotted flames.

“I finished watching my tv program, and I turned around to grab my remote and all I could see were these flames shooting up off of the porch. And so all I have do is yell and everybody’s up,” said Judy Hochschild.

Hochschild said she lives in the home with her fiancé, daughter, son-in-law, four grandchildren, two cats and dog.

Hochschild and her family members broke down into tears while crews fought the flames.

The family just spent a lot of money making renovations after their own house caught on fire two years ago.

“One side of my house is melted away again. we work, we have to work for what we have. And for someone to just come and take it take it like that is just unreal,” said Hochschild and her daughter.

They said the man who owns the vacant house was outside, trying to break in, just minutes before it caught on fire.

“He asked ‘would you help me break into the house. I want to get the cabinets out of the kitchen and see what else is in there that I can take for money.’ That’s exactly what he said.”

The Hochschild’s claim the man then got into his car and threw something into the house, making a loud noise like the sound of shattering glass, and sped off without his lights on.

The Battalion Chief on the scene could not comment on the circumstances leading up to the fire, nor confirm whether arson is a factor, but fire officials were interviewing neighbors, many of which said they, too, saw the man at the house before the fire started.

Hochschild said she’s tried reaching out to city officials regarding her concerns over the vacant house, but kept getting the runaround.

“It had a condemned sign on it, everything, for two years. I’ve called the city numerous times. ‘we’re looking into it.’ said Hochschild.

Crews had the fire under control within half an hour, but smoke billowed out for hours.

The cause of the fire is under investigation. City officials were at the scene around 7 a.m. on Monday, taking pictures of the damage in the daylight.