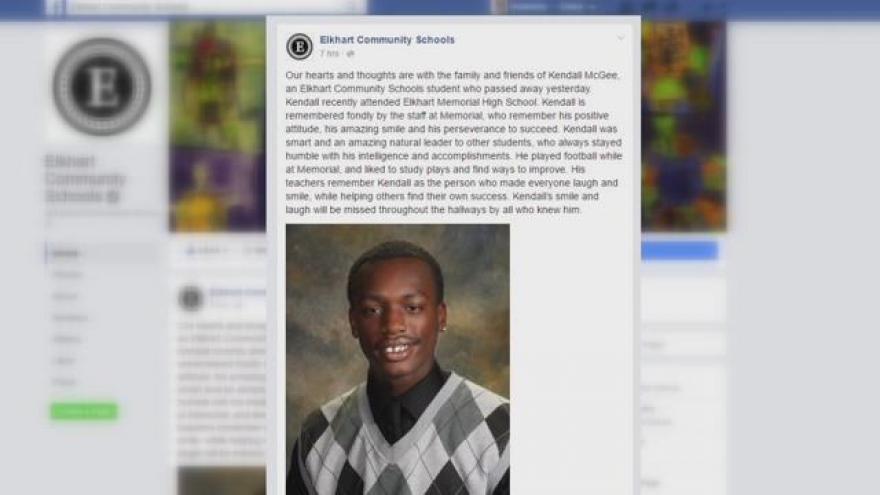 An Elkhart family says a major piece of happiness was unexpectedly taken from their lives.  On Tuesday night the family of 18-year-old Kendall McGee Junior received a horrifying phone call.

He jumped into the St. Joseph River and never came back up.

On Thursday the family will hold a vigil at 7 p.m. They are expecting a large group including a pastor to pray and remember the young man who was many things to many different people.

“He always made me smile,” Nicole Adam’s one of McGee’s children’s mother.

“He was a jokester and very out going and very funny,” says Michae Fox, McGee’s Cousin.

McGee was one of 14 siblings and close relatives say he never got lost in the crowd.

The recent Elkhart Memorial High School graduate had lots of attention around town.

He was an athlete and in the fall was headed too Southwestern Michigan College to play basketball.

"He was a good vibe to be around and just those are usually the ones that get taken first,” says Adams.

On Tuesday night, Kendall was swimming with friends in the St. Joseph River near Ash Road in Osceola.

DNR Sergeant, Ashlee Jackson says swimming is common in the area and that the current is not too strong.

"They went down there all the time and swam and stuff like that but this we never expected this to happen," says Fox.

Kendall never came back up.

Four hours after the initial 911 call DNR officers found his body in 15 feet of water.

“His mom is taking it hard because she feels like she wasn’t there to help him out or get him out like what a mother is supposed to do is protect her son,” says Fox.

No one could have ever predicted the tragedy.

Now family is preparing for the day Kendall's two young children ask about their dad.

“How do you think his kids are going to do? Do they even understand what’s going on what now?” asks ABC57 News

“Not right now but they have very powerful mothers that I know will uplift them and when the time comes and they ask questions they will have it all down packed,” says Fox.

The family says they are making funeral arrangements for next week.

On Friday they will hold a fund raiser at their home near Dotson and Emerald Street selling dinners to raise money for McGee’s funeral.