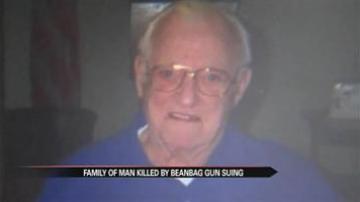 The family of 95-year-old John Wrana of Illinois has filed a wrongful death lawsuit against police.

They said police used excessive force last July after they were called to his assisted living facility because he refused medication and turned violent.

Police responded with a taser and riot shield, and an officer fired 6 bean bags at the man who suffered internal bleeding and died just hours later.

The man's daughter said police should have known her father would be seriously injured.

She says she wants accountability for what happened.

"He did not deserve to be treated in that respect, and certainly none of our elderly people ever do," said Sharon Mangerson, Wrana's stepdaughter.