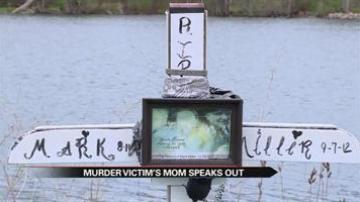 ELKHART, Ind. -- Almost 2 years ago, Mark Miller's body was found in a barrel in the St Joseph River. Miller's mom and the prosecutor who worked on the case both said from the beginning, they had no doubt Todd Stewart killed him.

"When they found Todd guilty we came out, the whole family and let balloons go. And that was just our way of telling him, it's over Mark, we love you, and we got him," said Sheila Miller, Mark's mom.

"This conviction speaks the volume of who killed Mark Miller, and Todd Stewart is definitely the person who did that," said Chief Deputy Prosecuting Attorney Vicki Becker.

Becker says she was confident from the very beginning of this case.

"It was definitely a case that we could get into from the perspective of believing what we were doing is the right thing," said Becker.

Although, Todd Stewart was found guilty, the Miller family still has questions.

"It's a bad thing to say but who helped him with the barrel after that? Who helped him shoot my son's legs and stuff him in the barrel and take him out in the water? He couldn't do that alone,' said Sheila.

We asked Becker about Sheila's questions.

"There are a lot of rumors, a lot of talk on the street that was investigated, but there is no indication at this time that any other person assisted in the actual murder itself, it was Todd Stewart," said Becker.

For the Miller family, healing begins, but Sheila says this is far from over.

"No I don't think this is the end I really don't," said Sheila.

Stewart will be sentenced on May 29.

Prosecutors say he could spend up to 65 years behind bars.