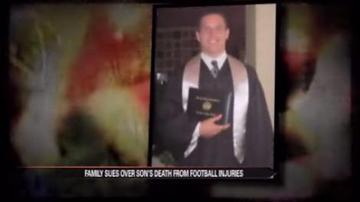 A family is filing a lawsuit after they say coaches ignored their son's injuries causing his death. The 22-year-old was an academic all star and a dedicated fullback at Frostburg State University in Maryland.

A new lawsuit claims his coaches ignored his complaints in 2011 even after repeat blows to the head caused his forehead to bleed.

"In one week he had sustained so much head injury, so much head trauma that he passed away from it. They beat Derek up and left him there to die," said the boy's father Ken Sheely.

The family is now suing their son's coaches, a trainer, the NCAA, and the company that made his helmet.