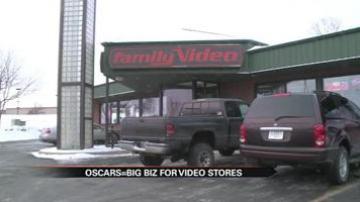 MISHAWAKA, Ind.-- The Oscars were not just a big win for some big stars.  It was also a big win for local video rental stores like Family Video.

“We have been sold out pretty much all day,” said Family Video employee Kyle Laskowski.

Robert Betty and his daughter Heaven were just 2 of the 500 customers that have been clearing the shelves of Oscar-nominated movies at Family Video over the weekend.

Laskowski says Family Video is always busy when the Oscars roll around.

There is one very important reason why. You cannot get these newly released Oscar-nominated movies anywhere else but local rental stores like Family Video.

“Netflix I know has to wait thirty or sixty days or something. Red box is the same thing. You cannot get those movies day one like Family Video does. We have deals with the movie companies that allow us to rent them out on day one," said Laskowski.

The Bettys like to watch all their Oscar-nominated movies before the award show.

They also like to pick their own Oscar winners.

“I’m a Tom Hanks fan. That guy was totally awesome. The actors were first time actors. They made it seem like you were actually there when you took over the ship,” said Robert Betty.