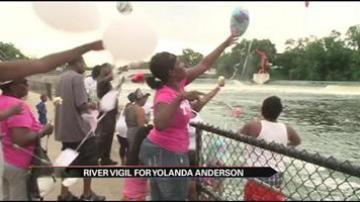 SOUTH BEND, Ind. -- Friends and family of 25-year-old Yolanda Anderson gathered at the St. Joseph River Friday night to hold a vigil in her honor.

“As an uncle, can’t nobody convince me that she slipped or jumped,” Yolanda’s uncle J.T. Hampton said.

Family members are still confused as to how Yolanda ended up in the St. Joseph River.

“We think it’s foul play and we’d like the police to investigate further,” Hampton said.

Hampton said she would have never gone into the water on her own, because she did not know how to swim.

“It just doesn’t add up to me," said Hampton.

They want the mother of three to be remembered

The family is accepting donations at the Clark-O’Neal Funeral Home to help pay for funeral arrangements.