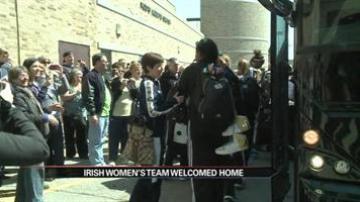 SOUTH BEND, Ind. -- Loyal Notre Dame fans cheered on the Fighting Irish women as they returned home from Nashville Wednesday afternoon. Despite the loss, fans showed the team their appreciation for their hard work this season.

Fans showed the team they're not disappointed in them and that they are proud of Notre Dame's incredible season.

Tom Balukiewicz has been a supporter for years.

"My wife and I have had season tickets for a number of years with the ladies. Way back before Jacqueline Battista was here," said Balukiewicz.

Balukiewicz says despite Tuesday night's loss to the Huskies, there are many reasons to be proud.

"Just because they lost one game, that doesn't say the whole season was a loss. It was a tremendous season for them," said Balukiewicz.

The mood at Purcell Pavilion was exciting and positive.

"Yes, they lost night but you know what, a couple months from now, they'll look back at this and say 'That was awesome,'" said Carol Rafferty.

Nearly every fan on hand came with one clear message.

"Even though they didn't win the National Championship, they're still number one to us," said Donna Quinn.

The loss was Notre Dame's first this year.