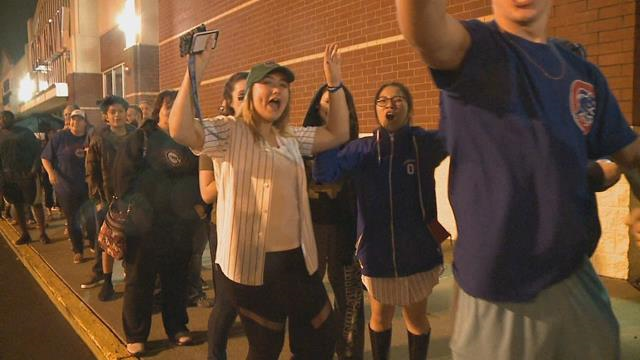 It was less than an hour after the Chicago Cubs claimed the 2016 World and the shelves of Dick's Sporting Goods in Mishawaka was already stocked with new Cubs gear.

The store opened just after the final out of the game which was around 1 a.m. on Thursday.

Fans who heard of the opening, lined up outside of the store waiting to get the new Cubs 2016 World Series Gear. In all there were about 100 to 200 people who showed up for the early opening.

“After we watched the post game we said we got to get some shirts and hats. My eight year old was begging me to come and I nope you got to get to bed buddy,” said one fan who was inside the store.

The store is stocked with merchandise including the hats and shirts the team wore while they celebrated their championship.

“I just drove 50 miles to get here after the game, I’m from Shipshewana,” said Mike McDonald.

Employees worked until very early hours into the morning to prepare for their 6 a.m. opening.

During the week, the store typically opens at 9 a.m. but opened early due to the special occasion.