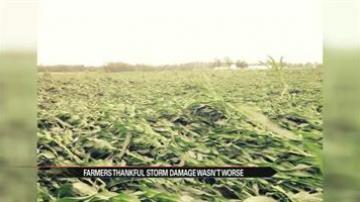 GOSHEN, Ind. -- The Paul family has farmed land on CR32 in Goshen for three generations. They suffered damage from the storms that came through early Tuesday morning. Ron Paul says he's never seen damage like this before.

Midwest farmers have a saying 'Knee high by the Fourth of July.'

However, right now, the corn isn’t knee high - it was flattened by the storm.

"He thought the corn was going to be wrecked because it was bent over, and something like this we've never really seen before," said Ron Paul.

Paul has never seen it like this in 45 years of living on the family farm.

"When crops are looking good you're saying man, things are in a lull, going good and then all of a sudden it just takes a small little, they say it was just a quick gust of wind that took everything," said Paul.

The National Weather Service estimated the winds were up to 80 miles per hour.

"Most people said as long as the stalk didn't break, it's going to come back, it might be bent when it gets taller but it'll come back, so we were fortunate as far as that goes because we've never really witnessed anything like that," said Paul.

Bent and not broken, something Paul calls a blessing.

"It could be worse, this isn't much worse than getting 20-30 bales of hay rained on. That's a part of farming," said Paul.

Farmers across the street from Paul also had damage to their corn from the storms. They said they will know more about the extent of the damage in five to seven days.