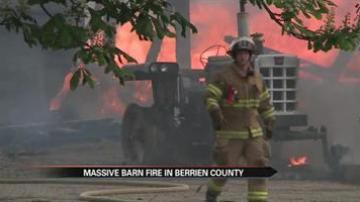 BERRIEN COUNTY, Mich. -- Firefighters are investigating the cause of a massive barn fire in Berrien County.

Firefighters from at least eight departments responded to a fire around 6 p.m. Monday.

It took at least 30 firefighters to extinguish the fire.

“When we arrived on the scene we had a fully involved structure,” said Bertrand Fire Chief Bill Knisely.

The barn was used to store straw, hay and a mixer.

“We went defensive on it. There was no way we could get inside to save anything,” said Chief Knisely.

Brian Richter and his family could only watch as part of their home turned to ash, feeling like this couldn’t have happened at a worse time for the family.

“I don’t know which is worse, this or losing dad on Sunday. Trying to deal with that, this didn’t help,” said Richter.

But he knows it could have been worse. And he is thankful no one was injured.

“I feel good that nobody got hurt and all the animals are okay.”

Knisely said their biggest challenge was the wind and that was the driving force of this fire.