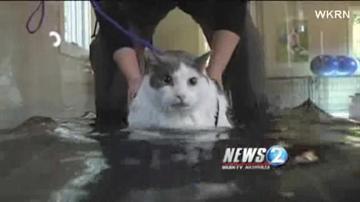 NASHVILLE, Tenn. (CNN)  -- A fat cat named Buddha has found a new workout plan that fits him. Much like humans, the obese feline is hitting the treadmill to slim down.

The cat tipped the scales at 31 pounds when he arrived at a shelter in Nashville, Tennessee after his owner died.

Buddha has been on a strict diet and exercise plan ever since.

When the hefty black and white feline turned up at Metro Animal Control last month he could barely get around.

He tipped the scales at just over 31-pounds, double the size of a normal cat.

Buddha's size shocked Penny Adams, a volunteer photographer who happened to be there taking pictures at the time.

"I've never seen a cat that large before."

Adams knew she had to do something so she brought Buddha to "The Cat Shoppe" in Berry Hill to get his weight under control.

The 6-year-old cat is now on a strict diet and exercises three days a week at Stonewater Animal Rehabilitation in Franklin.

Dr. Lisa Martin says the water holds up the cat's weight and is easier on his joints.

Buddha has built up his endurance and can now walk on the underwater treadmill for 12 minutes at a time. So far it's working. He's gone from 31.4 pounds to 26.8 pounds.

Buddha's goal weight is 20 pounds. Once he reaches it, the shelter hope to find the cat a good home.