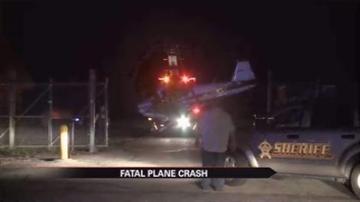 STARKE COUNTY, Ind.-- One person was killed in a plane crash in Starke County Monday afternoon.

An airport official told ABC 57 News that a local farmer and his wife found the crash just south of the Starke County Airport off of State Road 8 and called 911 around 2:45 Monday afternoon.

In an exclusive interview, a National Transportation Safety Board official told us the plane was an experimental plane that is built from a kit that anyone can buy. He said they are actually pretty popular for pilots who fly into air shows. The pilot was on his way to an air show in Oshkosh, Wisconsin.

"I've learned that the airplane was an experimental, amateur-built, or home-built airplane. It was a two-seat airplane with one engine," National Transportation Safety Board official John Brannen said.

Crews from the Knox-Center Township Fire Department worked through the night to move the wreckage of the plane to a hangar at the Starke County Airport. It was a dangerous operation for crews.

As they were hauling the wreckage in, they knocked down a power line that left those in the area without power.

Officials said they will continue to investigate to try and figure out what the cause of this fatal crash was. They said it could be a long process.

“The preliminary report just has the facts and circumstances that we know at that time about the accident. The fact gathering stage can last for several months,” Brannen said.

Police said the pilot was stopping at the Starke County Airport to get fuel. The male pilot was the only occupant of the single-engine RV-6 Vanns airplane and was pronounced dead at the scene.