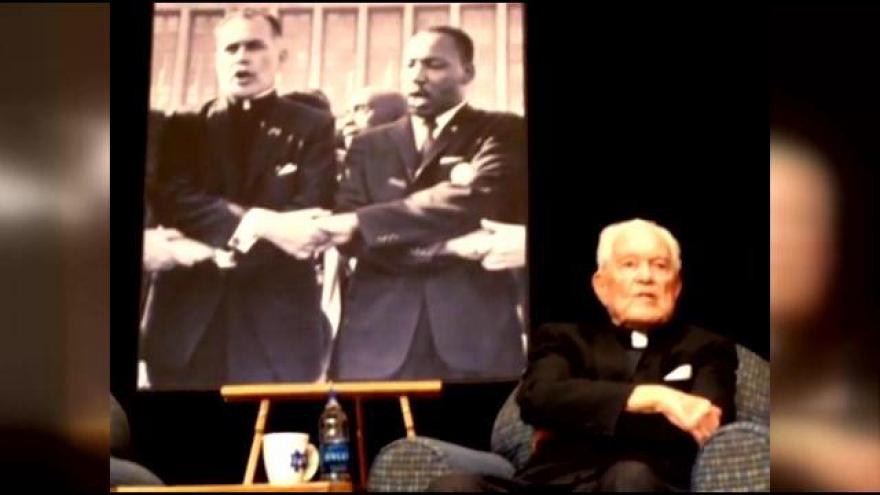 NOTRE DAME, Ind. - Father Theodore Hesburgh made a lasting mark in many places across the Notre Dame community, the state, and also the nation.

He wanted justice for all and he made a huge impact as a champion for civil rights.

People say he lived out his calling and he was even described as "an angel among us."

During the civil rights movement he marched the streets of Chicago with Dr. Martin Luther King Jr. in an effort to see equality for all people.

Gladys Muhammad, founder of the Martin Luther King Jr. Foundation in South Bend, recalled when she listened to all the stories Father Hesburgh had to tell.

"I knew him personally from him talking for two or three hours about his travels around the world. He was inspiring, just inspiring to me. He told me lots of stories of him with Martin Luther King and how the Civil Rights Bill got passed," said Muhammad.

She said that he was very supportive when she wanted to start the MLK Foundation.

"He talked about Martin Luther King being his friend. He helped open doors for Dr. King. He just dedicated his whole life to that mission and purpose of civil rights for all mankind," Muhammad added.

Muhammad said she first met him on Notre Dame's campus in the 60's when there were Tent Cities set up across college campuses to advocate for civil rights and to talk about stopping the war in Vietnam.

He was the first chairperson on the United States Commission on Civil Rights.

He served on the commission from the time it began in 1957 until 1972, when he was replaced by President Nixon because he criticized the administration's civil rights record.

"The commission to this day still feels the impact of his leadership. He set the mold for how our commission should function," said Castro.

His photo is displayed in the building of the U.S. Commission on Civil Rights and serves as a reminder for how the commission should operate.

"Everyday we should live what he lived, to walk in his shoes, to stand up for the issues he believed in with the same passion that he did," Castro said.