Father of doctor missing in Colorado speaks to ABC57 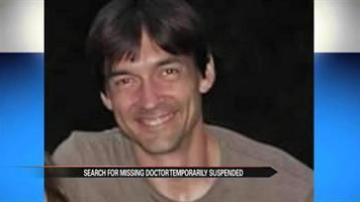 SOUTH BEND, Ind. -- Officials have suspended the search for a local doctor who disappeared in the Colorado mountains on Friday. James McGrogan, 39, went on a hike with friends and got separated from the group. He hasn't been seen since.

The search was suspended because of the weather.

"Unfortunately as of noon today the search and rescue was suspended due to some adverse weather. As of this point we don't really know of a date or time that it will resume," said Jessie Mosher, the Public Information Officers for the Eagle County Sheriff's Department.

"I don't know. You just live day by day I guess. You just wait for news. Of course the longer it gets, the worse it gets," said Bill McGrogan, James McGrogan's dad.

For Bill McGrogan the hardest part is not knowing where his son is, or if he's okay.

"You start thinking all kinds of things, other things that you shouldn't think, start losing hope a little bit," said Bill.

Police, volunteers, and even the Colorado National Guard have been searching for James for over 1,000 hours.

Tuesday afternoon, when the weather got bad, they called off the search.

"There's always risks for avalanche in these mountainous area. Visibility is very, very low. And obviously you have temps that factor in as well," said Mosher.

"It has been hard on my wife, really hard. Just worry, waiting for the phone to ring you know? It's crazy," said Bill.

Bill says his son is the most adventurous person he knows.

"Just whatever it is I just hope that he's in a good place. That's the main thing," said Bill.

The family is praying for a miracle.

James was born and raised in Chesterton, Indiana.