Father of murdered 11-month-old devastated by his loss 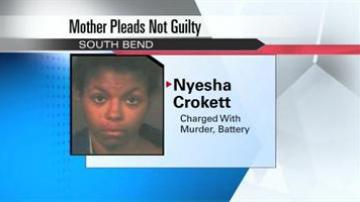 SOUTH BEND, Ind. -- A 21-year-old mother is facing murder charges for allegedly smothering and beating her 11-month-old son because she was angry at the child's father. The father spoke with ABC57 about the loss of his son in such a tragic way.

"For him to be gone, it feels like a movie or something," said Micahyah Greer.

Greer says there are no words to describe his pain.

"I done lost a lot of friends family but I never thought I'd see the day that I'd bury my own child," said Greer.

Teddy bears and toys are in the front yard in remembrance of 11-month old Micahyah. Police say he was smothered, kicked, and beaten to death by his mom.

"I feel like my world came crashing down. He was a joyful baby, he was real lovable everybody loved him," said Greer.

Greer says he spent time with Micahyah right before he went out with friends Saturday night.

"I had took my son on a walk in the stroller. He was smiling and laughing," said Greer.

He had no idea those would be his last memories with his son.

He's begging parents not to take any moments for granted.

"Be there for your kids all the time no matter what. Life ain't promised. Tomorrow you never know what's going to happen," said Greer.

He says he would give the world for one more walk with his son.

The Greer family is holding a candlelight vigil on Sadie Street Tuesday night.

Nyesha Crockett pleaded not guilty to murder, aggravated battery, battery and neglect of a dependent when she was arraigned Tuesday.