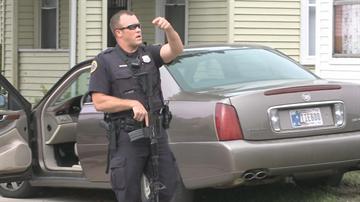 SOUTH BEND, Ind. – Nobody was hurt during a police chase that ended with a suspect shooting at cops, but neighbors say the pursuit came close to taking the lives of a number of children on Tuesday afternoon.

South Bend Police were called to the 2500-block of Ford Street at around 3:30 p.m. by a man saying that someone who had shot up his car days before was threatening him.  Officers responded and attempted to pull over the suspect who sped off in his car, eventually crashing into a yard on the 600-block of Brookfield Street.

"We heard some noise like cars banging, we heard some noise, we were watching TV, the kids were on the porch," described Lindsey Taylor, who lives with his family at the intersection of Ford Street and Brookfield Street.  “They said the car came across the grass here and luckily they weren't out here playing.”

Taylor’s children and other neighborhood kids had just moved out of the way of the suspect’s car when it drove over his lawn and crashed into the front yard of a house across the corner.

“When I came out the door the car was sitting there like that and the officers was in pursuit," Taylor explained, pointing to the car as police examined it.

Taylor never saw the suspect, who jumped out of his car and ran away, but did see the cops chasing after him on foot as the suspect ducked between two houses.

"We heard some gunshots…we heard about three gunshots,” Taylor described, saying the situation was terrifying.  “Especially with the kids playing out here, so we were just lucky that they weren't in the area where he could run over them, nobody got hurt."

According to detectives with the St. Joseph County Metro Homicide Unit, which investigates all officer involved shootings in the county, the suspect fired at police as he ran.  Police eventually tracked him down to a vacant house near the intersection of Ford Street and Pulaski Street and arrested him.

As of late Tuesday night police had yet to release the identity of the suspect involved in the chase pending formal charges.