Fats, oils, and grease are causing back ups in Elkhart 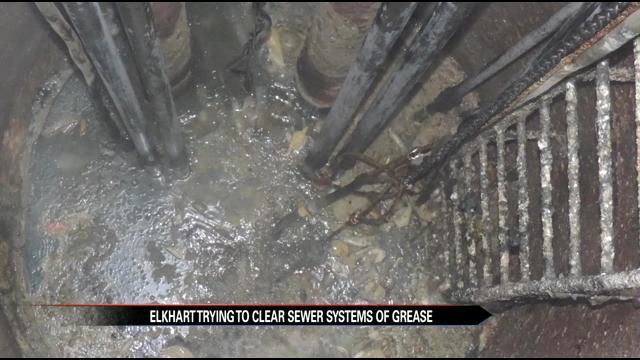 The city of Elkhart and its restaurants are working together to clear the FOG, fats, oils, and grease, that are causing costly back ups in the city's sewer system.

Elkhart says that by governmental standards it isn't even supposed to have a single sewer back up. After reviewing the numbers from last year and seeing that 12 of the 18 sewer lines were clogged by greasy sludge, leaders knew they had a problem.

They turned to restaurants to help them eliminate the waste, but some restaurants say the blame doesn't totally lie with them.

"There is an issue that has to be addressed but I think the city really needs to look at the city as a whole. Instead of just the business owners because there is probably grease being dumped all over the city that they just aren't really paying attention to," said Rico Iavagnilio, Manager of Michael's Italian Restaurant.

Iavagnilio's family has been in the Elkhart restaurant business for decades.

"My mom and dad have been here for 55 years and I can count on one hand how many problems we've had with our main line going outside and it really wasn't grease," said Iavagnilio.

That's why Iavagnilio doesn't understand why they city of Elkhart is putting such a narrow focus on restaurants to solve a major problem.

"We try to prevent this from happening ourselves. So we know where the problem areas are and we maintain those areas more frequently then we do any other areas," said Lynn Brabec, Environmental Compliance Manager for the city of Elkhart.

She says these are typically in locations with a lot of food service establishments and that is why the ordinance the city is proposing focuses on these businesses.

After public meetings this week restaurant owners like Iavagnilio spoke out.

"Ya know we all do our part to make sure that our stuff is clean because we don't want any issues because that's more maintenance and cost for us," says Iavagnilio.

After hearing these words they city changed the original plan to make restaurants install grease interceptors that could cost $40,000 and have a more focused approach at dealing with fog.

"Everyone will be required to register so we have a good handle on what FSE's we have and where they are and who the contact people are so that if there is a problem we know who we should contact ," says Brabec.

But Iavagnilio stands strong in his opinion that public education needs to happen in order for fog to be reduced.

"It's not just the restaurant owners because you have apartment complexes you have motels hotels all over the area and you have thousands and thousands of home that you have tied in to the city's sewer and I just think the education part needs to come from the city," says Iavagnilio

Brabec says the city of Elkhart has gone to certain apartment complexes educating residents and after that they saw a decrease in back ups in those areas.

Some lessons included cleaning off plates of greasy food before washing and not throwing your grease down the drain and taking it to a grease recycling center.