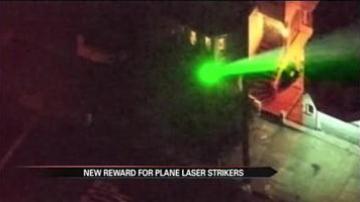 The federal government is offering to "pay up" to protect commercial pilots in the cockpit.

The FBI announced a new program where they will pay $10,000 to anyone with information that leads to the arrest of anyone who points a laser at a plane.

They say more than 10 times a day pilots who are trying to land get distracted when laser beams light up the cockpit.

"It's not just the danger to the pilots as well as the passengers, but to the people on the ground," said  John Kitzinger of the FBI.

Pointing a laser at a plane is a felony. If convicted, a person can spend up to five years in prison.

The government is also launching an educational campaign aimed at teenagers in the areas near airports.