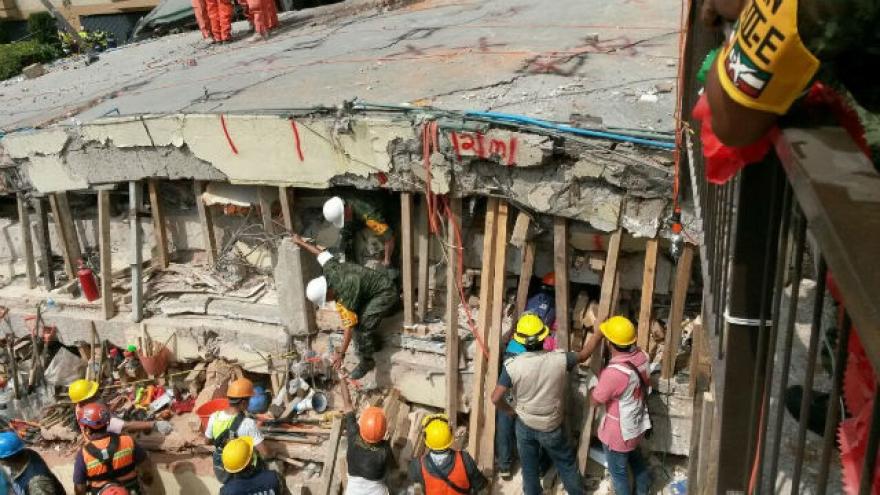 (CNN) -- Rescuers are getting closer to pinpointing the exact location of a 12-year-old girl trapped beneath the debris of a collapsed elementary school in Mexico.

"At this moment we know that at least one girl is alive inside," Major Jose Luis Vergara with the Mexican Navy told Foro TV, warning of premature reports that a rescue is imminent.

At Colegio Enrique Rebsamen -- one of several structures that crumbled in Tuesday's earthquake in Central Mexico -- rescuers are hauling long pieces of lumber and carrying chunks of concrete down away from the debris.

The magnitude-7.1 quake turned dozens of buildings in central Mexico into dust and debris, killing at least 230 people.

The crowds are staying quiet to allow rescuers to hear any voices coming from under the debris, but the sound of metal and concrete cracking punctuates the near silence.

As rescuers clawed through the debris looking for survivors early Thursday morning, volunteers brought water and food amid the chaos. Soldiers, rescuers and medics didn't stop working despite the rain and the risk of the building's further collapse.

The search for survivors at the school intensified Wednesday afternoon when rescuers made contact with the 12-year-old girl and when temperature readings suggested that two others might be alive inside, CNN affiliate Foro TV reported.

Shortly after a cloud of dust flew up prompting rescuers to briefly stop operations, rescuer Alberto Salinas made a public plea on TV for beams, pulleys and other materials to shore up the structure.

"This is the spirit of us, of Mexico," volunteer Ivan Ramos of Mexico City said Wednesday night. "That's our community in general; it crosses classes -- if you are rich or poor -- and any other divide."

'I thought someone was kicking my chair'

The elementary school was one of 16 schools in Mexico City to suffer serious damage in Tuesday's 7.1-magnitude earthquake. The tremblor caused part of the private elementary school to fold in on itself, sandwiching and collapsing classroom onto classroom.

At least 25 people -- 21 children and four adults -- were confirmed dead at the school, Luis Felipe Puente of the Ministry of the Interior's Civil Protection unit said Wednesday. As of Wednesday afternoon, three people were still missing there and 11 people had been rescued.

Foro TV interviewed two girls who said they were taking down their English homework as the building began to shake.

"The English teacher said there was a quake. Our teacher took us to the stairs and that's when part of the building started to come down. There was dust everywhere. We couldn't see."

Members of the Mexican navy, the Red Cross and the rescue team Los Topos joined the second day of recovery efforts on Wednesday, which drew volunteers from across the region.

Luisa, a 16-year-old volunteer, had been at the site since Tuesday. On her way to deliver sweets to rescuers she stopped to describe the grim scene.

"It's horrible. We saw a lot of children dead on the floor. Their moms crying," she said, shaking her head.

The crews removed bricks and pieces of concrete by hand and used thermal, sound and movement sensors to aid their search, according to CNN affiliate Foro TV. Throughout the day, they held up their fists and gestured for silence so they could listen for signs of life, extending a veil of calm over an otherwise chaotic scene.

A member of Los Topos told Foro TV he crawled into openings within the ruins over pieces of broken chairs and splintered walls.

Another member of the rescue group told Foro TV her small size made it easier for her to move through the rubble. She said she helped remove debris to create openings for cameras and sensors to move around.

"We're just trying to help," she told Foro TV. "Any parent, anyone with a child, would do the same."

By late afternoon, activity grew frenetic. Heavy machinery cleared away excess debris and brought in more to fortify collapsing areas of the buildings.

Ambulances and military vehicles filled the streets. Medical personnel and men with shovels streamed into the secure area.

Rescuers said they found two temperature readings of vital organs that were confirmed by a doctor with federal police.

"That person should be alive," another rescuer told Foro TV.

"It's definitely a body with life," said another. "There was some movement of the fingers."

Yet the weight of the lives lost weighed heavily on some volunteers, including Ivan Ramos. He has a son of his own who survived the earthquake.