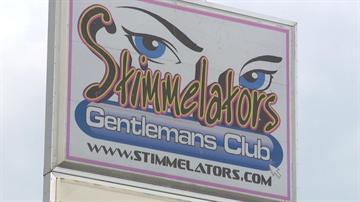 According to witnesses agents from the I.R.S. Criminal Investigation Division began the raid at around 9 o’clock in the morning.  Steve Ward, who owns a shop near Stimmelators said he’d noticed rows of police cars parked about half a mile away from the club while on his way to work on Wednesday, initially he thought it must be some kind of training exercise.

“Came into town to open the shop and get everything out front and set up and then all of sudden we saw all the agents move in across the street at Stimmelators,” Ward described.  “Cleaning lady had opened the door and as soon as she opened the door they all just went in behind her.”

“We actually saw them go in the side building and they had their hands on their guns and they came in and announced themselves federal agents,” he explained.  “They went in and stormed the door beside it.”

Other witnesses say up to 50 agents and cops spent around 8-hours at the club removing boxes of evidence and taking crime scene equipment in and out.  The federal agents drove cars with license plates from Indiana, Illinois, Ohio and Michigan, leading many to suspect it was a large scale, multi-state investigation.  The scene created quite a stir in the town of just of 1,000 people.

"We thought it was something really criminal when you see that many agents with their guns and their flak vests, I mean they were all loaded for bear so we didn't know what was going on," Steve Ward described.  “It’s the most excitement this little town has seen in a long time.”

Agents also raided the home of Sam Stimmel, the owner of Stimmelators.  The gentleman’s club has been controversial in the small town.  Neighbors said they have long suspected criminal activity goes on around the club.  A paper sign on the front door of the club advertises the sale of “Potpourri” which is the name of a kind of synthetic marijuana.

However, Steve Ward said Sam Stimmel is a good man who has tried to help the community.

Stimmelators was open for business on Thursday, employees declined to comment about the raid.  Officials with the I.R.S Criminal Investigation Division directed questions about the raid to the US Attorney’s Office for the Northern District of Indiana, calls and emails to that office were not returned on Thursday.