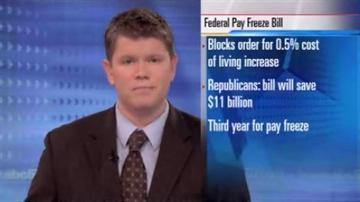 The House voted to extend a pay freeze for federal workers. That vote actually blocks an executive order to give federal employees a small cost of living raise in March.

Republicans said the bill will save the government $11 billion.

The pay freeze has been in effect for at least two years.

The bill is not expected to go far in the democrat-controlled senate.