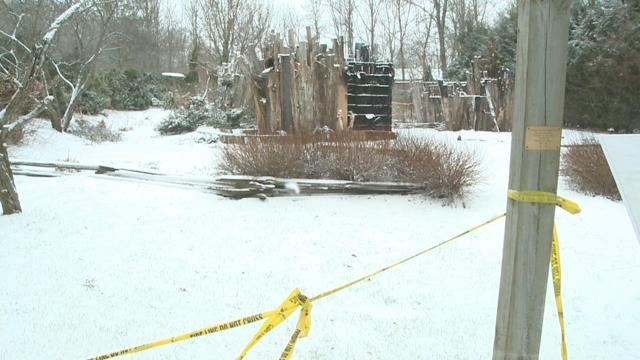 It seemed like the end of the track for Fernwood Botanical Garden's Railway Garden when a fire sparked in October.

An electrical fire at the end of that month left a majority of that exhibit damaged and destroyed. At first the staff at Fernwood did not know if they would be able to rebuild.

Only months later and they have already raised money through donations and a GoFundMe account to put towards rebuilding the Railway Garden, crafted by Paul Busse of Applied Imagination in Kentucky.

“We had someone start a GoFundMe account and all in all so far, we’ve raised over $12,000 to help this railway come back bigger and better than ever,” said Elaine Rowland, Fernwood Development Coordinator.

Rowland recalled the day she saw the fire happen along with the community support that has helped them get through this tough time.

Since the fire happened, there has been something that has served as a beacon of hope for the staff at Fernwood.

“This is our Little Ladybug, sometimes we call her lady. She is the sole train survivor. We found her half submerged in water after the fire was all over,” said Rowland as she held the only surviving train car.

She said that certain train car has always been a hit. “So many kids and adults alike would look forward to seeing her running in that garden.”

The garden is still accepting donations to aid in the rebuilding of the Railway Garden. Originally when it was built in 2009, it cost $50,000.

Staff at Fernwood hope that the garden will be redone and on track to reopen at its normal time in May.

“There is hope, there is light at the end of the tunnel. We will be rolling again in spring of this year,” Rowland added.