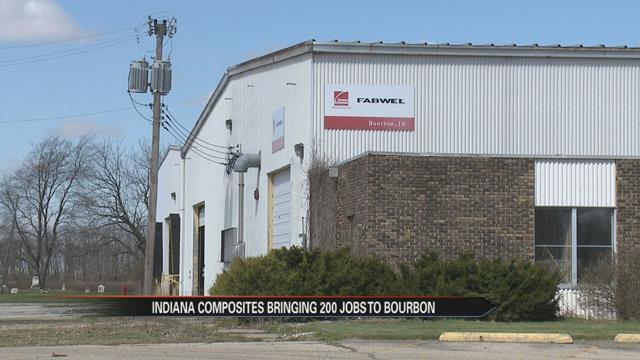 On Tuesday county and state officials announced 200 new jobs are on the way to Marshall County. Indiana composites a fiberglass manufacturer will set up headquarters in Bourbon.

The manufacturer will begin minor production next week.

They have six employees but they still need to hire a lot more.

“Any community that is able to capture 200 jobs with an average salary of about $18 an hour that’s important,” says Jerry Chavez the Executive Director of the Marshall County Economic Development Corporation.

“We are going to be a good neighbor it’s important how we project ourselves to the community,” says Peters.

Peters says he choose Bourbon because of the strong workforce and business-friendly community.

“You get the sense that this is the right company for this community they are very in tuned to not only core values but they want to be a good corporate citizen,” says Chavez.

Chavez says the $3.95 million investment took a year to secure.

“It’s a day to day struggle to grow and I think we are on the right track to doing that,” says Les McFarland, Bourbon Council President.

McFarland says once Hoosiers are hired there will still be work to do.

“Hopefully we can maintain some of these employees that are going to start working here,” says McFarland.

In 2015, 80 acres were annexed into the town of Bourbon and now McFarland says talk of housing development has begun.