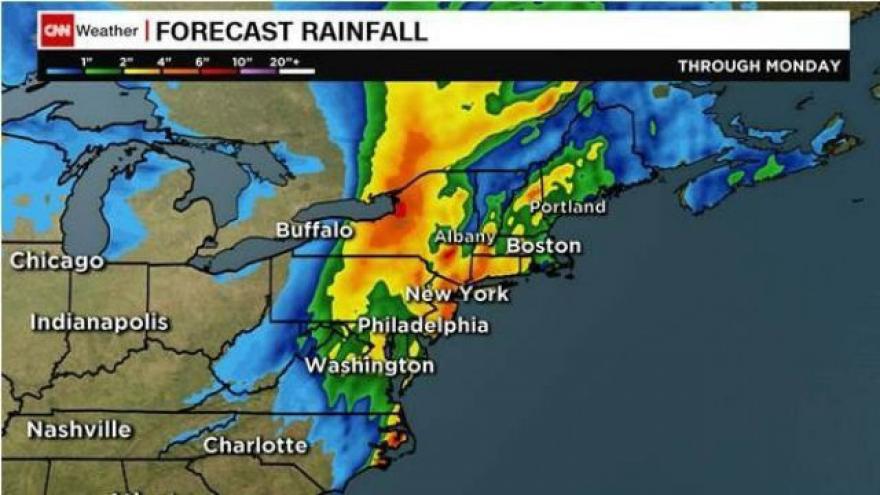 But high winds downed power lines, leaving more than 735,000 customers in the Northeast without electricity.

Rainfall continued across the region Sunday night as the storm essentially merged with a low pressure system coming from the Great Lakes region. The result is a nor'easter-type storm producing high wind and rain for parts of eastern New York and New England late Sunday into Monday.

The storm formed near western Cuba a few days ago, the the National Hurricane Center said. Early Sunday, it was racing up the Atlantic Ocean off the East Coast, moving away from Florida at about 31 mph, with sustained winds of about 50 mph.

By Sunday afternoon, Philippe had merged with a front along the East Coast, the center said, canceling watches and warnings. About 45 million people in the Northeast are currently under a Flash Flood Watch.

Philippe was not expected to become a hurricane. But it is expected to drench the region with average rainfall totals of 4-6 inches, and up to 10 inches in isolated areas of the Northeast and New England, forecasters said.

Tens of thousands of customers in each of the states of Maine, Vermont, New York and New Jersey were also affected by electricity outages, according to utility companies.

Superstorm Sandy hit New Jersey and New York five years ago Sunday. The storm soaked the Bahamas, Cuba and South Florida over the weekend before moving up the coast.

"This is not going to be the equivalent of Sandy. We would hardly see that or expect anything like that, but we are expecting very some very gusty winds, heavy downpours, considerable power outages," said CNN meteorologist Karen Maginnis.