Fight breaks out between cop, clown in Milwaukee 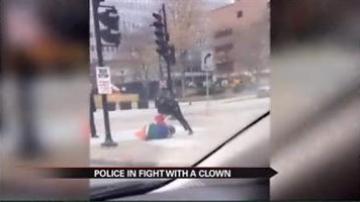 MILWAUKEE. -- A bizarre fight between a police officer and a clown caught on camera has gone viral.

The clown is a fixture outside Milwaukee City Government Buildings and is considered a community activist but as Mitch Cooper was driving by, the clown got into a brawl with a Milwaukee Police Officer.

"What's going through my head is a cop beating up a clown. How can I not capture this video and show it to all my friends? So I had to whip out my phone and hit on video," said Cooper, an eyewitness.

Police said they received several complaints the man was chasing cars with a squirt gun.

When police arrived, they said the clown resisted arrest.