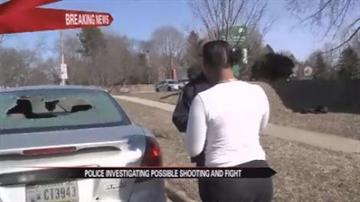 When police pulled up to the intersection, they say they found a silver Pontiac that was riddled with bullets.

A woman in her 20s, her boyfriend and three children were at the parking lot and got into their car to leave.

The woman's car was shot several times and the back window was shot out.

Family members say the woman was shot in the head, but police say they cannot confirm that.

Family members say she is a teacher's aide at Madison Primary Center and was in the wrong place at the wrong time.

Police say they found over 12 bullet casings from two different guns at the scene.