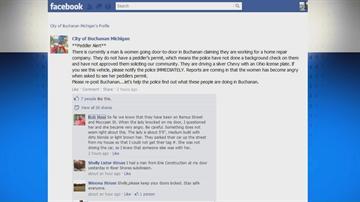 BUCHANAN, Mich. – Peddlers going door to door without proper peddling permits have prompted the city of Buchanan to post warnings to residents on their Facebook page.  On Wednesday evening a woman approached Robert Hess’s home on the 300-block of Moccasin Street claiming to be from a home repair company.

“First thing I asked her was, do you have a permit from the city of Buchanan?” Hess explained.  “As soon as I started asking questions she got very uncooperative.”

Peddling scams have become so common that Buchanan requires permits and background checks for anybody selling things door to door.  Hess, a leader in Buchanan’s neighborhood watch, knew to ask to see the permit.  The woman claimed she had one, but had left it in her car.  Hess still demanded to see the permit.

The woman became angry and walked away, eventually getting into a Silver Chevy truck driven by a man.  Hess sent out a warning on his neighborhood watch list and then contacted the city, where officials decided to use social media to send out a warning.

"He emailed me and so I just put a blurb on Facebook,” explained Juli O’Bryant who runs the city’s Facebook page.  “It's gotten a lot of response because people are concerned."

Buchanan has been praised for using its Facebook page to communicate with residents.  Its page has been ranked among the top government Facebook pages.

"It's probably our best way to get the news out,” O’Bryant explained.  “We have 4,682 people that live in the city and we have 1,500-plus people that are on Facebook."

The city posts everything from recipes, to lost pets and now even crime warnings.

“We ask them to please repost or please call your neighbor if there’s an emergency situation,” explained O’Bryant.

Now the city, with cooperation from police and neighborhood watch, is posting descriptions of suspects or warnings of peddlers or scammers.  The two peddlers causing trouble this week are driving a silver chevy truck with Ohio plates.  Hess described the woman who came to his house as about 5’9’’ with dark blonde hair.  Anyone who sees the peddlers are asked to call Buchanan Police and, now, they can also share it on the city’s Facebook page.