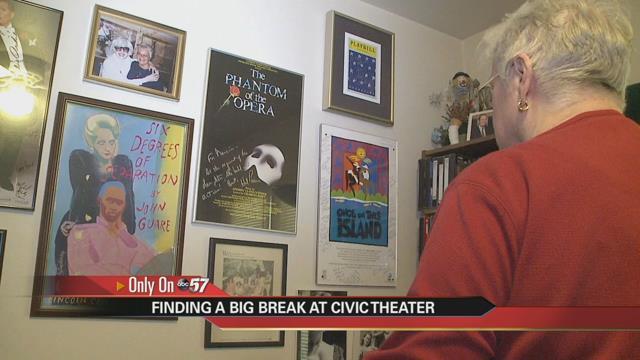 The Elkhart Civic Theatre, built in the late 1890s, has a ton of history but there’s one family in particular who may lay claim to being the theatre’s pride and joy.

Deirdre Lovejoy and Marcia Fulmer are a team that you really couldn’t script.

One is still acting, the other is still a critic and both are madly in love with art and entertainment.

Revered and slightly feared, 83-year-old Fulmer has been in the acting business, her entire life.

“I grew up with that and so did my kids and Dede always loved it,” said Fulmer.

Lovejoy loved acting so much that she’s still doing it, and doing it big.

On Tuesday, she took a break from filming on the set of the TV drama series “Elementary,” to talk to ABC 57 News.

And it’s that passion for acting that first began right at the Elkhart Civic Theatre.

You can even see Dede’s signature on the backstage wall.

“They have even done some shows here together at the opera house, I think the first thing they did maybe was cat on a hot tin roof back in the early 70s,” said Shoup.

Deirdre and her mom have even performed together on the theatre’s stage.

And to this day, Marcia still works at the theatre.