Fire at Mishawaka apartment complex sends one man to hospital 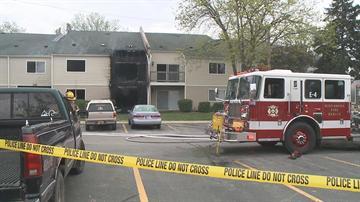 MISHAWAKA, Ind. – A fast moving fire at the River Pointe Apartment Complex off of Vistula Road sent one man to the hospital and left at least two apartments destroyed.

The Mishawaka Fire Department was called to the complex just before 6 p.m. and found flames shooting out of two apartments.  It took firefighters over two-hours to get the fire under control.

“It was all quiet, there was nothing going on, I got a buzzer at my door and they come in and say everybody needs to get out the apartment was on fire,” described Brenda Reinholtz, who lives at the complex.  “When I come out the whole building was in flames.”

Several people living in the complex believed the fire to have been caused by an older man who sparked his oxygen tanks on fire while smoking.  The man, who has not been identified, was pulled safely away from the building by two bystanders, including an off-duty firefighter.

“I see this gentleman pulling him out the building, so I assisted him by pulling him to the side or whatever and that’s when two explosions went off,” described Michael Szymanowski who helped pull the victim away.  “So we’re like, ‘oh wait, we got to get him back farther,’ we pulled him back farther that’s when it just completely engulfed the whole apartment complex so fast, it just happened so fast.”

The man was taken to the hospital and was in critical condition as of late Friday night.

Investigators have yet to officially release the cause of the fire.