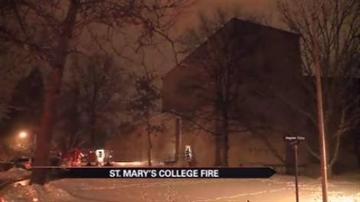 Fire trucks, ambulances, and other emergency responders rushed to Saint Mary's after the stage left curtain in the O'Laughlin Building caught fire. A spokesperson tells us security was there right away.

Sprinkler systems were on, and the Notre Dame fire department was there within minutes.

"Notre Dame fire was there within three  minutes. The curtains were still on fire, but it was contained as fire is concerned to the curtains" said Director of Media Relations Gwen O' Brien.

O' Brien says the investigators don't know how the fire started. However says there was smoke damage that spread to other parts of the building.

Notre Dame fire, South Bend, and Clay Township emergency crews all rushed to the scene to help knock it out.

"Of course it's all hands on deck when this kind of thing happens so we all came to campus and are very happy no one was inside at the time of the fire" said O'Brien.

The school was planning on having a program called "An Evening with Audra McDonald" at 7:30, Monday night. It will still be at the time, but in a different building.

School officials say cases are cancel in Moreau Hall for the rest of the day.