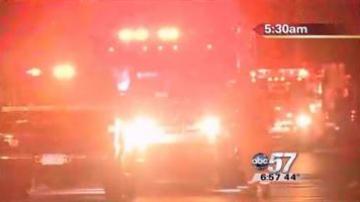 NILES, Mich. -- Four fires broke out in the Niles all believed to be related.

The first fire started around 4:30 a.m. on Cass Street, then just an hour later, firefighters were called to Lewis Street for a garage fire. That fire spread to from the house to the garage and then to the house next door. The fourth fire was on 13th and Wayne.

Around seven fire departments were deployed to assist with the fires. One firefighter was rushed to hospital for injuries. Police are not ruling out arson at this time, and all fires have been put out.

"I can say in my close to 30 years, I have never had this many structure fires going on at the same time. The fires were not so tough, it was just a man-power issue, and getting enough people to do what needed to be done" said Niles Township Fire Chief Gary Brovold.

Stay with ABC57 News for the latest updates throughout the day.