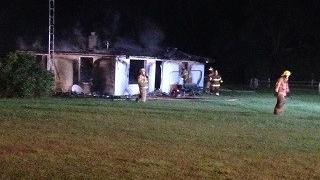 Firefighters with the Pokagon Fire Department say they got the call around 2 a.m. that a house in the 58000 block of Klumbis Rd. was on fire. When they got there, flames had fully engulfed the structure.

Corey Howard, the homeowner, said one of his neighbors called him when they saw the flames.

Howard and his son had been staying at his girlfriend's house for the night.

He said as fortunate as he feels that he and his son weren't home at the time, it's still a shock losing your home.

"It's going to take some getting used to," Howard said. "It's nothing I want anybody to see. I mean I got stuff in there that's priceless, a lot of sentimental value."

The Pokagon fire chief said the cause of the fire is still undetermined, but it's possible a cat that was left inside might have done something to spark the fire.

"He did say he had a couple of lamps that were left on," said Chief Chuck Bower. "He did have a cat. The cat could have knocked over a lamp or there's any number of reasons. Electrical failure, those do happen."