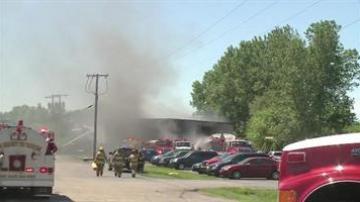 BREMEN, Ind. -- A fiberglass plant in Bremen was destroyed by fire Tuesday afternoon. The fire broke out around 1:30 p.m. at the facility on Dogwood Road.

The building belongs to Charleston Corporation which makes fiberglass components.

The president of the company said about 15 fire crews responded to fight the flames.

Three employees were treated for smoke inhalation but the other 250 workers were not injured.

"We have over 200 employees and we want to make sure we take care and we're responsible for those," said Jeff Wysong, President and CEO of Charleston Corporation.

Bremen's Chief of Police thought it was a controlled burn or small grass fire, but checked it out anyways.

"As I got parallel to the building on US 6, I did hear an explosion. It was a loud concussion. And at that time, a large amount of black thick smoke poured from the far, northwest building of the complex," said Police Chief Matthew Hassel.

The Bremen fire department confirmed the building was inspected in January and was determined to be up to code.