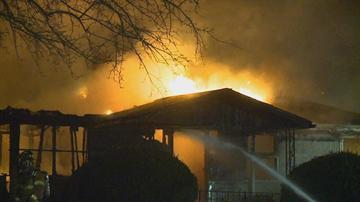 NILES, Mich. – Cooking Thanksgiving dinner took a disastrous turn after a couple’s home for over 30-years went up in flames early Thursday morning, the fire was apparently sparked by a turkey smoker.  Firefighters were called to the home on the 2800-block of Copp Road at around 4:45 a.m. and found huge flames spreading across the property.

"We had a car fire, which was right at the end of the driveway, we had a boat fire, we had the detached garage and the house on fire all at one time," described Bertrand Township Fire Chief Bill Knisely.  “It was a big magnitude at that time.”

Firefighting crews from Bertrand Township, Buchanan Township, Buchanan City, Galien, Niles Township, Niles City and Clay Township all responded to the huge blaze.  But, immediately after arriving on scene, firefighters knew there wouldn’t be much they could save.

“Pretty intense, we had to go direct to a defensive style of fire,” Chief Knisely explained.  “"It was too dangerous to put anybody inside…there wasn't any sense putting anyone's life at risk to save property at that time."

Almost everything in the home was lost, outside a boat and a motorcycle collection housed in the detached garage also burned.  The homeowner’s tried to pull a vehicle parked next to the burning garage away, but it had already caught fire.

“By the time our units arrived it was fully engulfed,” Knisely described.  “It looked like the bumper or maybe the tire was on fire before they pulled it away from the garage.”

The homeowner told firefighters that the entire chaotic scene had been sparked by a turkey smoker that had been left cooking during the night.

"They had put the turkey in at two o'clock the day before in the afternoon, and he had monitored it many times,” Knisely explained.  “Even got up at two o'clock in the morning to check on it and at that time he said everything was fine."

But, the homeowner awoke to find his house filled with smoke.  Chief Knisely said the smoker had been left cooking inside the garage.

But, even if you’ve taken every precaution, Knisely said you should always be on your toes.

"Everybody tries to be as safe as they can, but if it's a malfunction by a machine or something on that end there’s nothing you can do, just hope and pray for the best," he explained.

Nobody was hurt in the fire.  Initially it was reported that the homeowner’s dog had died in the fire, but it was later found unhurt and returned to its owners.