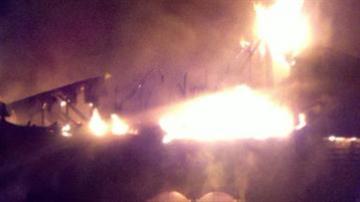 The fire broke out just after 9 p.m. at Park Jefferson Apartments on East Jefferson Boulevard in South Bend. Firefighters are still investigating the cause of the fire and have yet to determine where the fire started.

However, neighbors believe it to be an electrical fire and say they first saw flames coming from the bottom, corner unit.

It took firefighters more than 45 minutes to get the fire under control. Eight apartment units were completely destroyed by the blaze, five of which were occupied by residents at the time of the fire.

The fire was contained to one section of the building because a fire wall was in place and kept the flames from spreading throughout the complex. Fire officials say the neighboring units were evacuated immediately, but many of those apartments sustained heavy smoke and water damage.

Fire officials says that no one was injured or taken to the hospital.