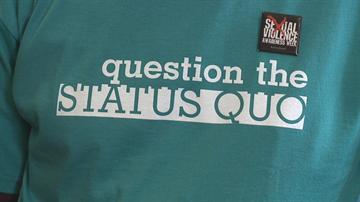 According to the school's student-run newspaper, The Observer, Sunday's attack was the third sexual assault reported to Notre Dame police in the month of October. Prior to October, the newspaper had not reported a sexual assault since April.

In all three emails sent to students and faculty following October's sexual assaults, Notre Dame police have stressed the same caution, urging everyone to be aware of their surroundings.

Now, a group called "Fire Starters" is taking action, hoping to ignite change on their campus. The group passed out teal shirts Monday with the phrase "Question the Status Quo," and everyone is expected to sport the t-shirts on campus Tuesday.

"Teal Out Tuesday" is one of several events apart of Sexual Awareness Week happening on campus.

"This was a t-shirt that was designed by our students and in many ways we want to defeat and change the status quo, which means that we have to change how we behave,” said Director of the Gender Relations Center G. David Moss.

The group called “Fire Starters” is part of the Gender Relations Center and wants to put a stop to the violence.
“It happens on every college campus, and so our goal with this week is to make students aware to make our community aware of ways in which we might prevent that and help people to heal in terms of having gone through sexual violence,” said Moss.
Moss said they want students to empower each other.  “We talk about it takes a village to raise a child, well in many ways it takes a community to heal the environment from sexual violence,” said Moss.
Notre Dame’s campus isn’t the only South Bend school talking about sexual assault awareness. Indiana University South Bend’s campus said it’s been stepping up its education on the issue.
"This year in particular we decided that we need to step things up. We have just written a grant to get some funding for sexual assault prevention here on campus,” said Laura Hieronymus Director of IUSB Health and Wellness Center.
She said the increase in education comes since housing has been added to the IUSB’s campus in the past years.
"The fact that we have housing, we have students over there who are living in close quarters and we know prior to this any assaults that would've happened would’ve happened off campus,” said Hieronymus.
Hieronymus said the school is even trying to take a unique approach on sexual assault education. Instead of just focusing on the average self-defense classes, it’s stressing the issue of being aware of your surroundings.
"Bystanders play a huge role. This is kind of the new wave of how we can help make things better,” said Hieronymus.
But both colleges agree that the students have the control.
"They need to be aware that at any time they’re at risk and so raising that level of awareness is really important,” said Hieronymus.
"In reality the only time change actually happens on a college campus is when students really take the front runner position. They really have the opportunity to mentor each other, to do peer on peer education. Research after research has proven that the best type of education is peer on peer education. So we can help our students become more empowered, then they can actually change this environment,” said Moss.
Notre Dame Students are wearing the teal shirts for “Teal out Tuesday” to bring awareness to the issue.
Here’s a full link to the Sexual Violence Awareness Week Schedule.
http://grc.nd.edu/calendar/sexual-violence-awareness-week/?month=10&year=2011&categoryID=&relatedID=
Share this article: