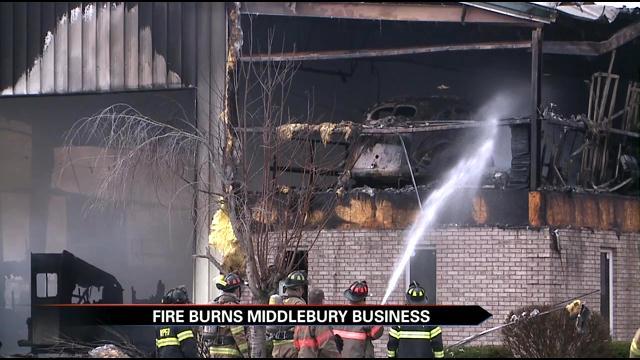 It was a long day for multiple fire crews out in Elkhart County. NRC Modifications, a luxury motor coach manufacturer, caught fire around 9:30 a.m.

The business is located at CR2 and Greenfield Parkway.

“This end, the east end, is going to be a complete loss,” says Phil Schrock, Captain of the Middlebury Fire Department.

Schrock says the call to put out the destructive fire came in around 9:30 a.m. after owner of NRC Modifications, Nick Cook, called 911.

“It was too fast to even control. The area where it is at is a wooded area, so it just took off like you wouldn't believe,” said Cook.

Cook was inside the plant when the fire started.

“I yelled to all the employees to get out and luckily everyone got out,” says Cook.

There were about 25 employees inside at that time and all managed to escape the fire and flames without incident. After they got out Captain Schrock says there was no way he could send his crews inside.

“Pretty much all our operations were defensive from the outside. It wasn't really safe to go in just because of how much fire we had inside and it took probably a couple hours to get it under control,” says Schrock.

Fire caused the roof to cave in and crews had to bring in an excavator to remove sheet metal from the structure in order to completely put out the flames from the outside of the building.

It took about four hours to put out Wednesday's fire.

Cook is already looking ahead to what's next for NRC Modifications.

“Luckily our fire walls that we had up in there saved a big portion of the building, the last two sections. Hopefully as soon as we get the ok we can start putting things back together and go to work. It won't be too long,” says Cook.

Cook adds that he witnessed the fire start next to a cleaning booth then the flames took off.

The Middlebury Fire Department says this information helps but they need their investigators to go in and confirm and results will come back in a few days.
Share this article: