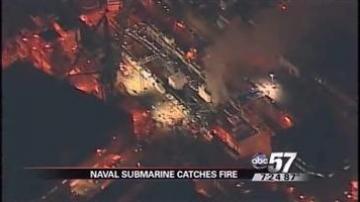 KITTERY, Me. -- Firefighters worked through the night to put out a fire on a nuclear submarine.

The U.S.S. Miami was docked for repairs at a Naval shipyard in Maine when a fire broke out.

Nearly five hours into the fire, smoke could still be seen from the shipyard.

Specialized crews from as far away as Boston had to be brought in to battle the blaze.

Seven people were injured. No one was killed.