Firefighters believe they are getting the upper hand in wildfires 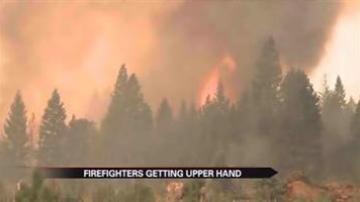 PONDEROSA, Calif. -- Firefighters starting to turn the tables on some of the fiercest burning fires burning out west.

Flames from the Ponderosa Fire in California were so powerful that they blocked out the sun.

The fire there is so intense that nearly 1900 firefighters are working to put it out.

Residents there have been forced to evacuate.

Fire crews do think that they have made some serious headway in stopping the Ponderosa Fire but they are worried the wind could pick up again Tuesday evening and spread it even further.