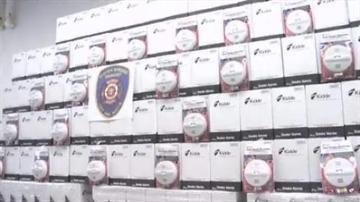 BERRIEN SPRINGS, Mich. -- New studies indicate most people only have about 3 minutes from the time they hear the smoke alarm to escape from a home safely.

The Berrien Springs- Oronoko Township Fire Department was granted $110,000 from the federal government to raise awareness about smoke detectors.

This week, the fire department kicked off a program to install smoke detectors free of charge.

Unfortunately, the program is a result of a local tragedy.

“I took one of the first calls, it was from the father. He stated that his house was on fire and his daughter was inside and they could not find her,” said dispatcher and firefighter Lanny Duffel.

It was a little over a year ago that a fire consumed an apartment building in Berrien Springs and killed 3 year old Rockelle Haas.

"I felt, as a firefighter, I know how that adrenaline feels, but also I felt very helpless,” said Duffel.

When the fire investigation was complete, officials only found one smoke detector in the burned out apartment and it was found in a kitchen drawer.

Knowing the difference smoke detectors could have made on that tragic morning, duffel, began pushing for community-wide smoke detector installations.

"So this is an opportunity to make our community safer. Take care of the owner occupied residents and  get everybody up to the current code to give them as much time as possible to get out if an accidental fire starts,” said Stover.

For duffel, seeing the program kick off is a small bit of good from a terrible tragedy.

"Through that event, that horrible, terrible event we bring hope out of it. And our hope is each one of these detectors,” said Duffel.

Fliers were distributed throughout Berrien Spings and Oronoko Township.

Anyone who wants to have their home checked for smoke detector safety just has to fill out the back page and return it to the fire department.

Firefighters will check the current smoke detectors in your home or business and either replace the device or the batteries if need be.

If you need additional smoke detectors, firefighters will install them.

All of these services are free