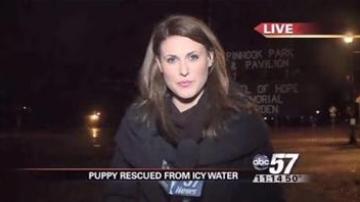 SOUTH BEND, Ind. -- A walk in the park was anything but for one family and their puppy this weekend.

Misto, an 8-month-old pitbull, had to be rescued by firefighters after he ventured onto the ice at Pinhook Park in South Bend and fell through the ice. It was close call for the puppy, but he managed to to hang on until help arrived.

It's hard to believe that just two days ago the 8-month-old pitbull almost did not make it home from a trip to the park after he chased a goose onto the frozen lake and fell through the ice.
"He was really far out. I was really scared, I thought he was going to drown," says owner Kadesha Allen.
The Allen family Realized the ice was too thin to walk on and that Misto was too far shore, so they called 911.
"He started slipping under the water and I thought I was just going to have to sit there and watch him drown," says Allen.
Misto was 50 feet from shore and had been in the icy water for almost 45 minutes when firefighters arrived. "He would not have lasted too much longer. He was struggling and definitely panicking. He was still above water, fighting though," says South Bend firefighter Troy Williamson.
Firefighters say they are surprised Misto was able to swim that long in the cold water, since it only takes minutes for fatigue to set in and the muscles to seize up. Moments after crews arrived, they too broke through the ice and had to swim the rest of the way out to Misto. Firefighters say Misto knew immediately help had arrived, gladly jumping in the stokes basket before being pulled to shore.
"He kinda was a sweetheart. He didn't fight us at all, in fact he was very glad to see us," says Williamson.
However, there was no one more happy to see Misto that the Allen family safely on shore. " I just felt relief. I was just thankful they got there and happy," says Allen.
Firefighters say it's just another day's work, but understand that pets are family members for many people, which they are glad this story had a happy ending.
Share this article: