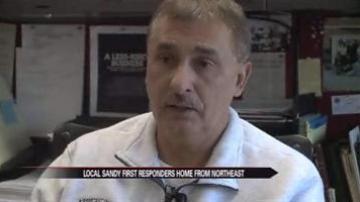 SOUTH BEND, Ind. – A local group of firefighters are back from assisting Superstorm Sandy victims. The storm caused billions of dollars in damage and left millions in the dark.

It isn’t the first time the group has been deployed. They were sent to Southern Indiana to help with tornado cleanup earlier this year.

Each time they hit the road to lend a hand, members say it better prepares them in case a disaster ever happens here.

"We sent requests out to Maryland, New York, New Jersey, how could we help?” said Jim Lopez, Operations Chief. "Initially we were sent to Baltimore, because originally they thought it was going to come up Chesapeake Bay and do a lot of damage in Baltimore."

"Everyone is overwhelmed when you see the devastation and destruction,” said Lopez.

"As they are overwhelmed, there are things that they may overlook,” said Darrell Eiler, South Bend Fire Department instructor.

That's where members of the team help out.

"They are also part of the emergency, they've lost homes, they've had devastation themselves, so not only do they need to help their neighbors they have to help themselves,” said Eiler.

Eiler and Lopez are two of the seven South Bend firefighters that made up the team of 15 that spent 14 days helping out.

"Fifteen of us responded from District two, which is seven counties,” said Lopez.

"What we took was our administrative stuff, our laptops our printers, easels anything we needed to do incident management,” said Eiler.

"We were based in three tents that were underneath a parking garage,” said Lopez.

They helped communities with logistics such as getting contractors to remove debris, move trees, or establish electric.

At the same time they built relationships, which will pay off in case the time ever comes where we need a hand here.

"Especially the police officers and firefighters I dealt with, made it very clear if we ever needed anything to let them know,” said Eiler.

He also plans to share what the group accomplished at state level at conference in Indianapolis next month.